Rabindranath Tagore’s short story “Dalia” (1892), aka “Daliya” or “Daalia”, concerns the innocence of love in a social climate dominated by family duty, honor, and revenge.  This story served 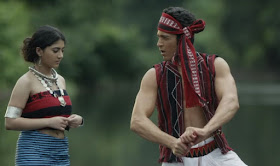 as the basis for the 26th and final episode, “Daliya”, of the anthology television series Stories by Rabindranath Tagore (2015), which was under the general directorship of Anurag Basu, with this episode scripted by Anurag Basu and directed by Tani Basu.

Tagore’s story, as well as this episode, is set in 17th century Mughal India and concerns real historical personages, which is a departure from most of the episodes of this series that are set sometime in the 1930s.  The themes here, though, should be familiar to readers of other, more contemporary, Tagore stories – the contrast between love (understood to be an intuitive feeling of the heart) and tradition-bound social demands devoted to duty, honor, and revenge.

The historical background elements are concerned with the family of Shah Suja, who was the second son of the Mughal Emperor Shah Jahan, known for, among other things, commissioning the construction of the Taj Mahal.  Shah Suja was serving as the appointed governor of Bengal, when his father, the emperor, came down with a serious illness.  This led to a ruthless war of succession, which resulted in the brother of Shah Suja, Aurangzeb, acceding to the Mughal throne and Shah Suja’s desperate flight to the Arakan (Rakhine) state in what is now Myanmar.  There the Arakani king supposedly offered refuge to Shah Suja and his family.

We can break the story of “Daliya” into four sections, or “acts”, parts of which are dramatized flashbacks.  Note that since this story has a surprise ending, you may want to avoid reading my account of the final act, as well as that of another review [1], before you see it for the first time. 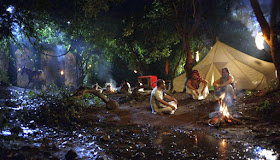 At the outset a caravan transporting a litter (hand-carried sedan) is shown traveling through the forest.  We will soon learn that the principal figures of this caravan are:
During a rest stop, Rehmat tells Budha that his adopted daughter is about to marry a king.  In order to explain why, Rehmat has to give Budha some background information.  Although later important background information will be presented in dramatized flashbacks, this background is told verbally.  Rehmat tells him that
Thus the caravan’s participants that we see indicate that Zulekha and Rehmat had found Amina.

2.  Flashback – Zulekha Meets Amina
The story now moves to a flashback sequence depicting when Zulekha, riding in her litter through the forest, spotted Amina running nearby.  After they meet and embrace, Amina takes her sister to meet her “father”, the humble fisherman Budha.  Zulekha wanted to find her younger sister before the Arakan king did so that she could convey to her the necessity of doing her duty – commit a murder.  In order to avenge the brutal killing of their father and their older sister, it was 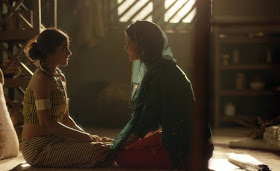 necessary, she told Amina, for her to kill the king when she had the chance.  Even though this act of revenge would probably cost the girl her own life, it was absolutely necessary for Amina to fulfil her familial duty.  For her part, Amina expresses the (correct) opinion that revenge is pointless, and she is undecided about accepting her sister’s command to take revenge.

But we also see in other flashbacks that Amina has a very friendly relationship with another local boy, Daliya, who is another humble fisherman.  Indeed, Zulekha can readily see that the insouciant and flirtatious way that Daliya acts toward Amina suggests to her that the two of them are in love.

3.  A   Marriage Proposal is Received
Budha now receives an official marriage proposal from King Budh Dutt Sudamma for his stepdaughter, and the king also wants to have a meeting with the girl before the marriage.  Zulekha is excited, because she feels that this meeting will offer her sister the best opportunity to kill the king.  Again, she insistently calls on Amina to fulfil her duty to enact revenge.  And Amina reluctantly accepts. 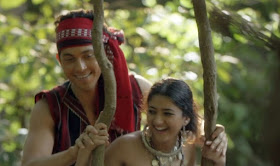 But as Amina thinks things over, she realizes to her regret that the man she really cares about, Daliya, doesn’t seem unhappy that she is about to marry the Arakani king.  She realizes that she really loves Daliya.  This is the most beautiful part of the story, because it portrays Amina’s inner struggle between her heart and her sense of duty.  Even Zulekha, seeing her sister’s ardor for Daliya, begins to question whether her own obsession for revenge justifies sacrificing her dear sister’s life.

As the time approaches to go to the meeting with the king, Amina desperately tells Daliya that she loves him and that she wants to elope with him.  But Daliya just laughs her off and tells her he is too carefree for marriage. 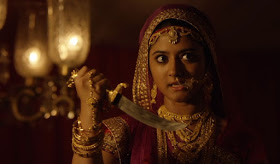 Zulekha and Amina go to the arranged prenuptial meeting place, and just before Amina is about to go alone into the king’s chamber, Zulekha hands her sister their father’s bejeweled dagger.  She has been saving it for years for the right moment, and now the time has come.

Amina enters the room and approaches the royally robed king from behind.  Trembling, she raises the unsheathed dagger to strike.  But at that moment, the king turns to face her and reveals himself to be her dear Daliya!  Seeing his face, Amina faints, and the king/Daliya carries the unconscious girl to the bed.

Zulekha, who had been waiting outside, rushes into the room.  Daliya explains to her that he knew all along who Amina really was, and that he figured that the only way he could ever get her to accept him was to approach her first as a commoner.  He wanted her to see him without thinking of all the treachery associated with her father’s murder, which he admitted was a terrible wrong.  He tells Zulekha that he truly loves Amina.  When Amina awakens, she is thrilled to see her beloved Daliya tending to her.  And Zulekha is finally won over, too. 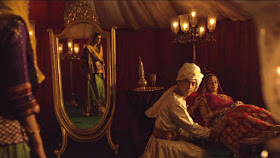 This is another moving story about love triumphing over all obstacles.  But a key feature here is that in this story, it is a man’s, not a woman’s, faith in love that turns the tide and wins the heart.  And Daliya accomplished this not by relying on his earthly powers, but by following the dictates of his compassionate heart.
★★★★